Do I have to test for BVD in England?

No, it is not compulsory in England and Wales to have animals tested for BVD. Compulsory eradication programmes have been running in Scotland and Northern Ireland since 2013.

“I believe that BVD testing has been very beneficial for my particular farming enterprise as it definitely helps with bloodlines and assists in keeping diseases controlled and eliminates the chances of unnecessary losses.

In my opinion, England would benefit from a BVD eradication programme. With England having the same market groups as ourselves, a BVD programme would be the best solution long term. Recent statistics have shown that here in Northern Ireland our BVD cases have decreased significantly highlighting that the eradication programme is definitely working and having a positive impact on the farming community. If not controlled, it could certainly have detrimental economic consequences. The scary reality is that just one infected calf could potentially result in a widespread epidemic within a very short space of time.

I have been purchasing the Countryside Service’s BVD tags for years, and I find it to be a very simple operation. The BVD sample is easily collected with no modification needed. Once the tissue sample is taken it is retained in the applicator, and ready for me to send on to the laboratory for testing.” 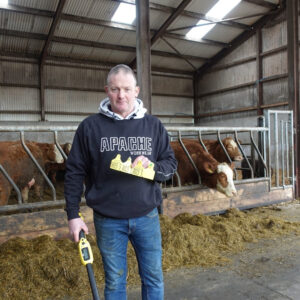 What do I gain from being BVD free?

Ever tightening margins for livestock producers mean productivity gains are a necessity. Taking steps to remove BVD often hidden within a herd rewards farmers with;

Financial returns are estimated to give a return of €10 for every €1 in the Republic of Ireland BVD programme (source; AHI).

Do Dalton Tags provide a tag and test service I can use on-farm?

Yes, ear tissue samples are easily collected for testing using the FLEXO Tissue Sample Tags, then sent for virus testing to our trusted labs which are National Milk Laboratories (NML), The Cattle Information Service (CIS) and SAC. You can send as few or as many samples as you require. Official FLEXO Test Tags are ideal for your new runs or replacements. They can be primary, secondary or management tags and are available in flags or buttons. Buying a tag and test package can save you both time and money.

The Bovine Viral Diarrhoea virus (BVDV) is the cause of BVD. Like all viruses, they are microscopic infectious organisms. In the case of BVD virus, it is suggested that 170,000 virus particles placed side by side would only cover a distance of 1cm. 1ml of blood from an infected animal may contain more than 1 million infectious viral particles. Infected animals secrete (or shed) vast amounts of virus.

What are the symptoms of BVD in older calves or in the days following calving?

Symptoms which may occur after birth and in older calves; include scours, calf pneumonia, and increased occurrence of other diseases, ill thrift or death. Commonly these calves do not respond to treatment as you would expect. Their immune systems have been suppressed due to possible exposure to the BVD virus from another carrier in the herd or other infection source and become Transiently Infected (TI).

What are infection sources of the BVD virus and how long can it stay active?

The BVD virus is highly infectious and can be spread by nose-to-nose contact, urine, faeces (including slurry) tears, saliva, clothing, equipment, buildings, trailers and, on occasion, semen and embryos. It can stay active out of body for up to four weeks. Sheep can act as ‘reservoirs’ and spread the disease but this is not fully understood. Little risk is thought to exist from wild ruminants but infection has occurred in goats and wild deer. Biting flies are thought to spread infection also.

Can humans and other animals contract BVD?

There is no known health risk to humans from the BVD virus although we can spread it on infected clothing and equipment.

Which tags does Dalton Tags recommend for BVD Testing?

Dalton Tags recommend the FLEXO Tag & Test system. It is a practical and simple system to use and is completely tamperproof from farm to laboratory.  FLEXO Tissue Sample Tags identifies the sample by the unique individual 2D barcode number which is pre-printed on the sample tube. Tag & Test  can be purchased from Dalton Tags with or without the test. Dalton Tags recommends CIS (Cattle Information Society) Labs for testing. Dalton Tags are extremely confident the FLEXO system is the best available. Please ring: 01636 700990, visit our websitewww.daltontags.co.ukor email sales@daltontags.co.uk for further information.

Does my vet need to attend?

You can test for BVD by yourself. FLEXO Tissue Test Tags are available direct from Dalton Tags or through your local merchant. They are quick, easy and accurate and the most cost effective way to test for BVD – remember you can have them with a test included.

What are the symptoms of BVD in adult cattle?

They can vary but include; fever, lethargy, loss of appetite, ocular discharge, nasal discharge oral lesions, diarrhoea decreasing milk production, coughing and poor fertility. Chronic infection may lead to signs of mucosal disease. This animal may have become infected from their mother whilst in the womb, from another animal or even the virus picked up from infected clothing, equipment or a building and can survive up to four weeks out of body.

What are the symptoms of BVD in newly born calves?

Calves can be stillborn or die soon after birth. They can suffer from wide stance, tremors, stumbling about with lack of coordination (Ataxia) and failure to suckle. This can indicate they have been infected from their mother and are what is known as Persistently Infected (PI) and they need to be isolated, retested, then culled and not sold on.

I do not seem to have a problem so why should I worry?

BVD can be the underlying cause of a range of issues in your herd that may on the surface not seem significant; more ‘empty’ cows than you should have indicating fertility problems, the odd ‘poor doer’ which never amounts to much, or scours or respiratory problems here and there –‘all part of livestock farming’ but which may be caused by BVD silently taking your time and profits.

What is Mucosal disease?

This is often triggered by BVD and animals affected often have scours often containing blood, a high temperature and mucosal lesions in the mouth, as well as ulcerations at the muzzle, the nose, the rim of the hoof. It often leads to death of the animal.

END_OF_DOCUMENT_TOKEN_TO_BE_REPLACED

In June 2021, we were approached by 1300KOALAZ to produce an ear tag for Koala’s being re-released back into the wild.

1300KOALAZ are the largest group of experienced and dedicated Volunteer Koala Carers and Rescuers in South Australia. Their mantra is “Rescue, Rehabilitate and Release”.

They started our operation in August of 2019. Their volunteers are the most experienced Koala carers in South Australia with over 10 years of industry experience with native wildlife.

Koalas are a well-known species not only in Australia but all around the world. These cue animals also have a scientific name, Phascolarctos cinereus, which is derived from the Greek word ‘phaskolos’ (“pouch”), as well as “arktos”, which means “bear”.

The word “cinereus” is Latin and translates to “ash-coloured” or “ashy” – referring to the colour of fur that koalas had when they were first encountered around Sydney by Europeans.

You may even occasionally hear koalas referred to as “drop bears”, a fictional name given to them that stemmed from Australian folklore. (This imaginary animal, described as a carnivorous predatory version of a koala, is usually used to scare tourists.)

The koala population has greatly varied historically. During 2016, there were approximately 300,000 koalas in Australia.

However, in 2019, it was estimated by the Australian Koala Foundation that there were less than 80,000 remaining in the country.

Some sources state that this number may even be as low as 43,000. At the moment, koalas are vulnerable to extinction, which is a step above being endangered.

Reports have indicated that between 350 and 1,000 koalas living in the northern part of New South Wales have died due to the recent terrible fires there. There are even some grim predictions that koalas may go extinct by the year 2050.

Sally from 1300KOALAZ said “We received the tags today and they are just great, thank you so much. Everyone absolutely loves them and they are just what we need. I thank you for sorting this so promptly and professionally for us and Addie and Willow are being released tomorrow”

Any cookies that may not be particularly necessary for the website to function and is used specifically to collect user personal data via analytics, ads, other embedded contents are termed as non-necessary cookies. It is mandatory to procure user consent prior to running these cookies on your website.